I’m always on a lookout for interesting datasets to collect, analyze and interpret. And what better dataset to collect/analyze than the meta-dataset of my own activity collecting/analyzing other datasets? How much time do I *really spend working per day? How do I spend most of that time? What makes me productive? These are all relatively important questions that I’d like answers to, and since I prefer my answers based on data and not confirmation-bias-susceptible personal anecdotes, I wrote ulogme.

“I prefer my answers based on data, not confirmation-bias-susceptible personal anecdotes”

I’ve now collected my computer usage data over a period of almost 3 months. In this post I’ll highlight some of the features of the project, some of the insights I was able to derive so far and some thoughts about where I hope I can take it next. And who knows, maybe by the end of the post you’ll want to become a user yourself :)

What’s out there already

The idea of tracking and visualizing your computer activity is not at all new. It has been around in various shapes and forms in Quantified Self circles and several programs already exist that try to fill this need. Among the few better known ones are RescueTime and Toggl, but there are literally tens to hundreds of other quite terrible copies. Among all of these, I couldn’t find anything that satisfies a few very simple, basic requirements:

Nothing like this (by far, actually) exists, so I set out to implement my own solution.

ulogme is small and simple: There are two backend components: a tracking script that records activity and a small local web server wrapper that serves the activity logs to the frontend (visualization pages). The tracking script currently records active window titles (at frequency of once every 2 seconds) and keystroke typing frequency.

Lets go through a brief overview of some of the resulting visualizations and features. First there is the single day view. Lets look at my August 1st, for example. The header tells us the day of the recording and there is space for a short “blog” post that can be written up for each day:

Header: day information, refresh button, buttons for going between days, and a little editable "blog" post for the day.

Now we start to get to the meat. It looks like I was in the office from 10AM to 8PM on this day. Now, remember that we record keystrokes and window titles throughout. What follows is the keystroke breakdown for the day:

Keystroke statistics for the day.

We see that I spent most of the day coding in Sublime Text 2 (which I use to write Python/JS/C++) and Gmail - Looks like I wrote quite a bit of email! Next, ulogme shows the barcode of the day, as I like to call it. This is a breakdown of all the windows on that day: 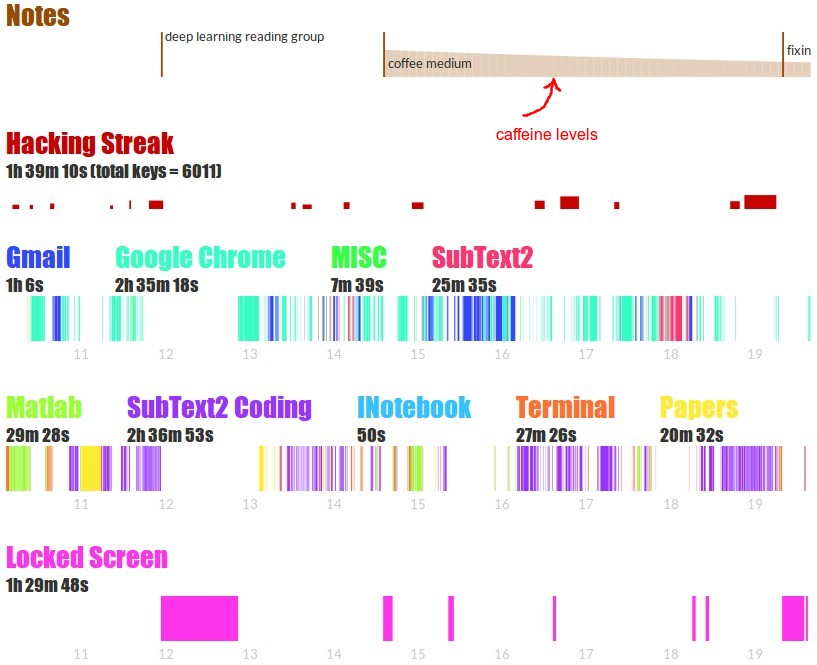 Barcode of the day. Mousing over any of these strips reveals the exact window title.

This view is a little dense so let me unpack it one by one:

In the end, ulogme shows the final breakdown of titles that occupied me on this day: 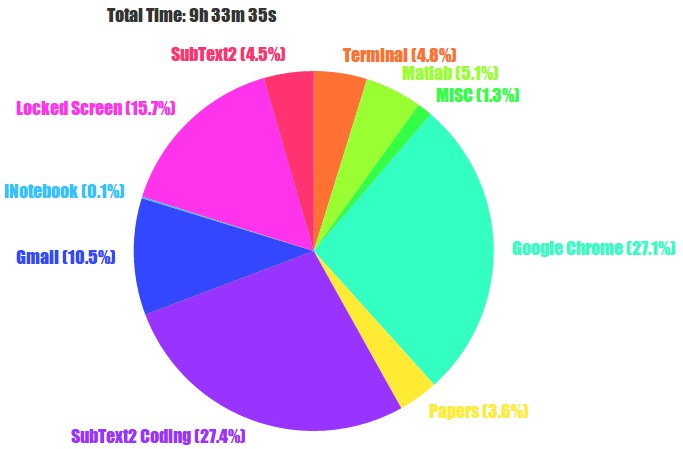 That’s interesting, it looks like I actually only spent 10% of my day in Gmail. So even though I wrote a lot, it was just a few emails and chats I quickly sent out.

Insights for one day are interesting, but everything becomes signficiantly more meaningful when it is put in context of a large number of days. Perhaps you noticed the “Overview” link on the header; Clicking this takes you to the overview page of ulogme that takes the statistics for all days and puts them together. I recorded my activity for almost 3 months now. Here is the delicious data visualized for the entire period (with some overlayed annotations): 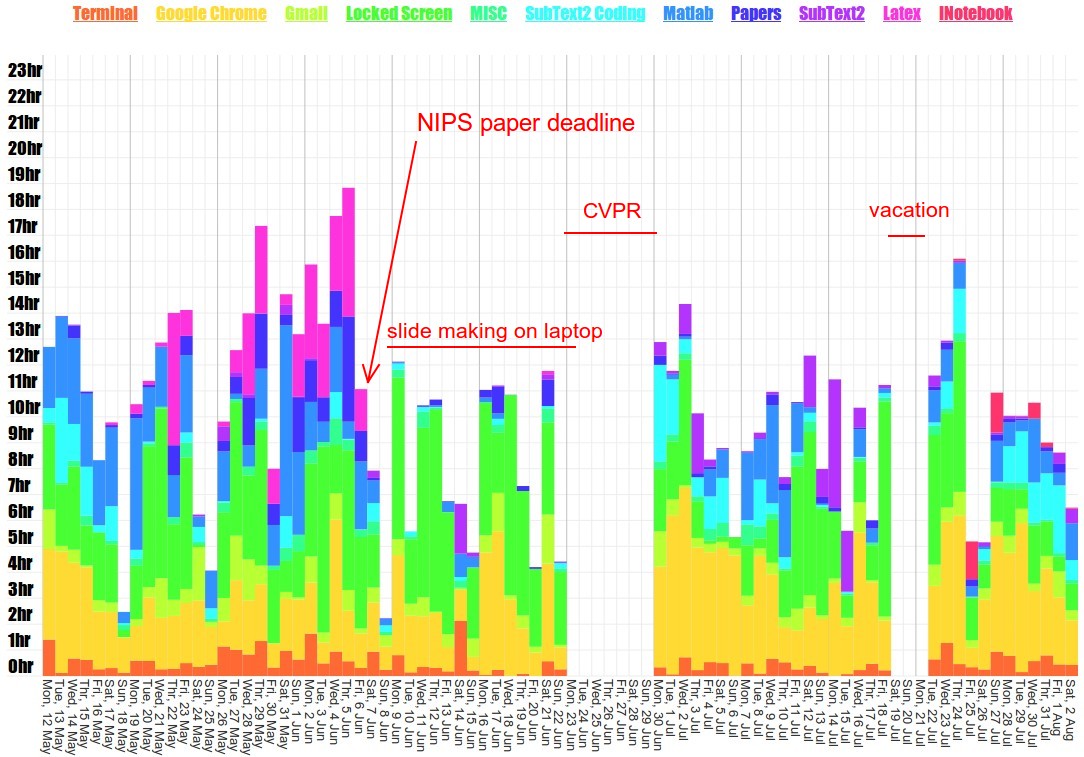 Total amount of time per day spent in various applications over a period of three months. The titles on top are clickable and toggle on/off the visualization of any one of the titles.

SO AWESOME. There are many fun things to note:

Next, ulogme gives me nice breakdown for both keystrokes and time spent in every window, across all time:

Summary of keys and time per window across all 3 months.

This is a little incomplete because I do some hacking on my laptop, but it paints an interesting picture nonetheless. It looks like I spent a good chunk of desktop time in Matlab, but seemingly I spend the most amount of time in Chrome screwing around and browsing the internet. Great.

What it takes to write a paper. Note that, interestingly, my total time for Latex is 35 hours - this is how long it takes to write a paper! Additionally, I pressed 225,149 keys in my Latex editor and the $ wc -l on my paper .tex file reveals that it has 40,192 characters. Some of it is template code but, at least approximately, this means that it takes about 5.6 characters for every one character in the final paper!

The final visualization is too long to paste here entirely, but I will show a snippet:

Keystroke frequencies visualized for every day, along with the marginal sums on top and right.

This visualization seems to suggest that I do most of my work between 10AM and 8PM, and a very productive day is about 50,000 keystrokes. You can also see a bit of my post-NIPS refactory period with much lower keystroke activity.

Going forward, I’m hoping to make ulogme into a nice, open-sourced pet project. The code is all available on Github under MIT License and anyone is welcome try it out (if you’re on Ubuntu or OSX - Windows is not supported, and if you’re using a modern browser).

And if you’re feeling extra adventurous, I warmly welcome pull requests for new features or bug fixes. The code base is a mix of Python, Javascript and I use d3.js for all visualizations. The project is in fairly early stages and the code is not among the nicest I’ve produced, but I’ve started fairly major refactoring efforts to make the onboarding process easier.

In longer term, I’m hoping that ulogme codebase will evolve to become beautifully modular set of data view plugins that could be customized, stacked up and composed in the user interface as desired.

Im summary, I feel I’ve gained quite a few insights into my own work habits by just visualizating the data, but there is much more work to be done on the analysis side as well. The holy grail here is still not implemented: What are the correlated of my productivity? Does sleeping more help? Does drinking coffee help? Do vacations or breaks help at all? All of these questions have answers and I can’t wait to find them, in the data.